Today in the world 42 Million people are captive and enslaved. We won’t stop until the last one is free.

Human Trafficking, the fastest growing industry in the world, is now a $153 Billion industry.

The most heavily trafficked victim in the world is U.S. Children. 50-60% coming from within foster care

Children make up 25% of modern-day slavery victims. God’s children are not for sale

Tim Ballard serves as the co-chair of the White House Public-Private Advisory Council to End Human Trafficking. Tim’s mission in life is to end human trafficking and allow victims to receive the treatment necessary for healing. Human trafficking or modern day slavery, is the fastest growing criminal enterprise in the world, it’s a 153-Billion-dollar industry. Tim’s shared that “It’s now rivaling the drug trade because you can sell a pound of cocaine one time. You can sell a child 10 … 20 … 30 times within a 24-hour cycle and that’s not an exaggeration.”

As a young kid, Tim would dress up for Halloween with his FBI jacket. His dad said with Tim in the house it was like they had their own personal security guard that would check the windows and doors at night. This constant caring nature led him to serve a two-year service mission for his church in Chile, South America. Learning Spanish aided him in his Bachelors degree in Spanish and Political Science from Brigham Young University.
MORE>>

You can just see this is his life’s mission. Seeing him with those kids, is really, really touching. I have a deep love for Tim, he’s a really good soul. He’s recruited so many good souls around him. Now it's this army who are unbelievably committed and incredibly effective.

I value things like honor, integrity, honesty and courage. Tim's the real deal. He says "Let's go get the kids"....there is no ulterior motive. He cares about making sure the kids are safe. I am beyond humbled and grateful to call him my friend and my brother. He is the one of the best friends of mankind that they don't even know yet.

Tim is the most sincere, most honest, honorable man I think I have ever met. When we met, I said I'm in! He is transparent....you can see his love and compassion. He has a clear vision of how to stop child sex slavery.

Tim is going into places that are very dangerous like some of the great Saints and martyrs...he has my ultimate respect, especially for saving little children. Playing the role of Tim Ballard is the 2nd most important film I have done after The Passion of the Christ.

I think it's very noble to bring people to light; I think it takes so much more courage to take your light to darkness. (Tims) mission is to save these kids, and it makes me really think, am I following what Gods mission is for me?

All you have to do is be exposed to what Tim is doing...how significant the works is...how needed the work is. Our organization is behind him 100%

Tim Ballard is a dynamic public speaker. He is the founder of Operation Underground Railroad (O.U.R.). O.U.R. now operates in 24 countries and in 25 states. Tim has been apart of many different tactical situations all over the world. His experiences have taken him into the darkest places imaginable as he has fought to save children that have been sex-trafficked. Yet, he has been able to find light wherever he has gone. How is it possible for someone to see this kind of darkness and still have a positive outlook? In his message, you will learn how light and clarity have come into his life and those around him in some of the most intense circumstances conceivable. Tim talks about how to confront the crossroads in your life by creating an environment that produces the very characteristics and attributes you desire most, attributes that will lead you to achieve your goals and dreams. It doesn’t matter whether you’re a business owner, a leader, a mother or a father these principles are the same! MORE>>

Tim has always been driven by the quest for truth and the search for the light. This hunger for truth has brought him success in his career as a special agent leading investigations into child sex-trafficking while finding the light has sustained him and helped him to endure some of the darkest places on Earth. Tim has spent nearly two decades investigating crime during which time he has acquired the skills needed to see these investigations through to the end. In his books, Tim exploits his talents as an investigator to unveil lost moments in history that can provide us with insights into our future as individuals and as a nation. The same principles that shaped the foundation of our country can shape and strengthen our personal foundations.

In his search for the light, Tim has discovered true heroes: the men and women who have made our country what it is today, such as George Washington, John Adams, Harriet Jacobs, and Abraham Lincoln. His investigations have taken him on a truly unexpected journey. Each new piece of evidence or information pushed him forward as he confronted the challenge of finding the hidden truth behind unsolved historical mysteries. He learned patience as he painstakingly uncovered every small clue or simple truth that would advance his investigation, having faith that the next discovery was right around the corner.

Tim brings the reader along with him on his journey in each of his books as he unravels the evidence and pieces together diverse and illuminating accounts of the past. We hear of heartbreaking tragedies and of miracles that delivered the sweetest joy. We also learn lessons that will shape our personal and national future. Join Tim on these historical voyages and judge his investigations for yourself . Will they change you?

What people
are saying

As a native Navajo I thank you Mr. Ballard for all you do and are to those who are hurt and feel despair! The mission you are on is wonderful. I pray for you and the good work you do for the wounded spirits you help!

The organization you created and the sacrifices you have made to do so has inspired me to be stronger, braver, and better.

It’s been so exciting, heartwarming, and inspiring watching your hard work and devoted focus produce such amazing results. May God continue to guide and bless you as you continue to fight for those who need you so desperately.

Of all the ugliness in this world, slavery is the worst. Thank you for bringing light to the world by fighting this war

Just watched your story on Amazon Prime. God bless you for all you do, you are a light in a very dark place. There is no keener revelation of a society's soul then how it treats its children. 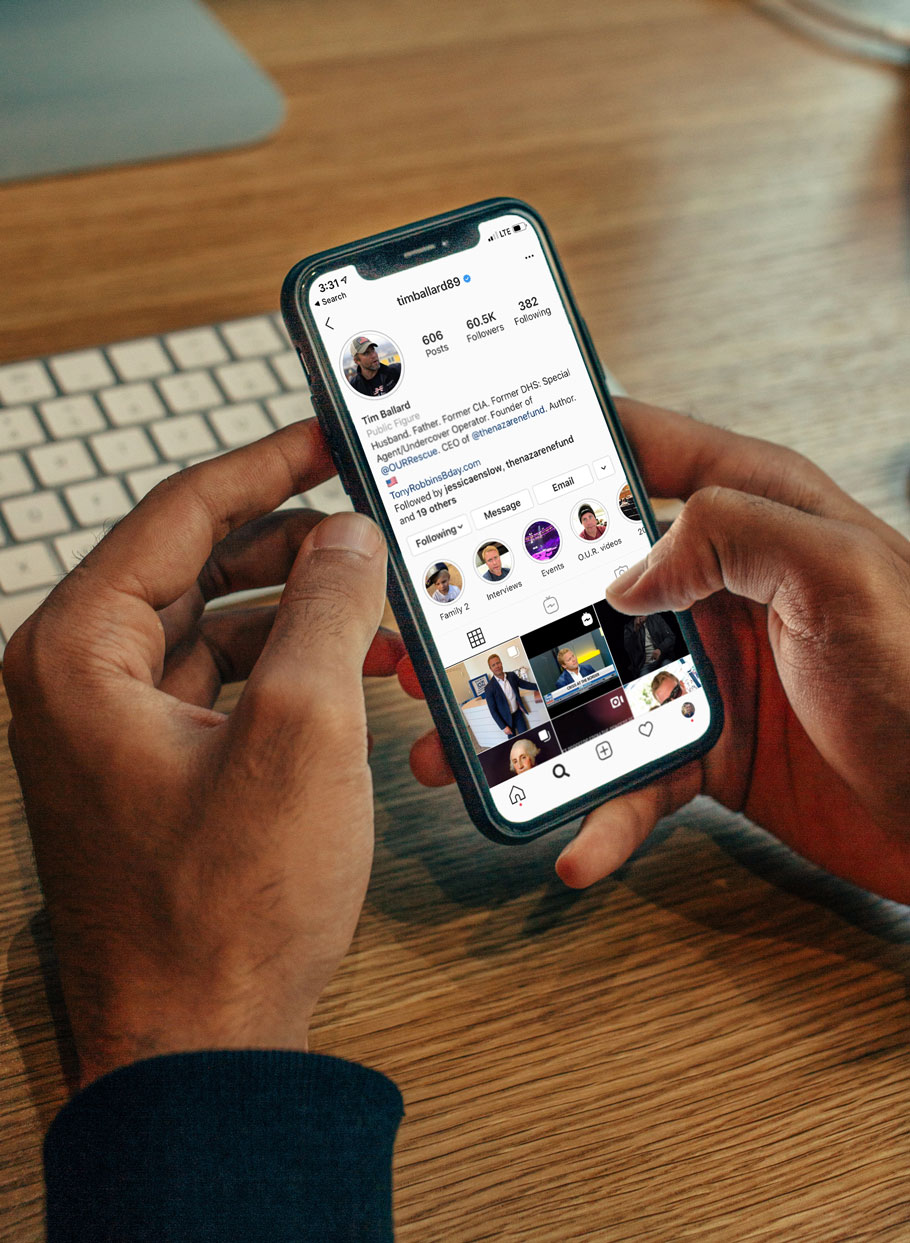 Please fill out the form to receive alerts regarding events and important messages.

Tims products are coming soon, we would love to get to know you.

Please fill out the form to receive alerts regarding events and important messages for The Nazarene Fund.

We use cookies to ensure that we give you the best experience on our website. If you continue to use this site we will assume that you are happy with it.OkNo